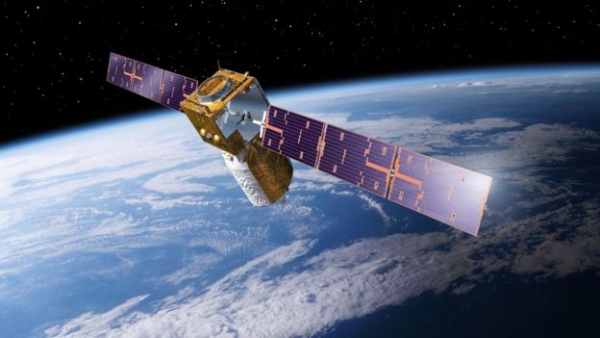 Meteorologists are hopeful the mission will have a big impact on the quality of medium-range weather forecasts.

The rocket was due to lift off on Tuesday, but the launch was postponed - ironically - due to high altitude winds.

Providing all goes well on Wednesday, the satellite will begin a programme of testing once it is safely at an altitude of 320km. Team members hope that routine forecasting should be incorporating the laser's information within the year.

How to measure the wind from space

Aeolus will fire an ultraviolet laser through the atmosphere and measure the return signal using a large telescope
The light beam gets scattered back off air molecules and small particles moving in the wind at different altitudes
Meteorologists will adjust their numerical models to match the information gathered by the satellite, improving accuracy
The biggest impacts are expected on medium-range forecasts - those that look at weather conditions a few days hence
Aeolus is only a demonstration mission but it should blaze the trail for future operational weather satellites that use lasers

Why does this space mission matter?
Currently, there are multiple ways to measure the wind, from whirling anemometers and weather balloons to the satellites that infer wind behaviour by tracking clouds in the sky. But these are all limited indications that tell us what is happening in particular places or at particular heights.

Aeolus on the other hand will gather wind data across the entire Earth, from the ground to the stratosphere (30km).

The biggest benefits should come to forecasts that look a few days ahead.

Bad storms in Europe, for example, will sometimes have their origin in the tropics, and when meteorologists fail to anticipate their severity it's often because the initial-state conditions given to computer models contained inaccurate wind information.

How big an improvement will Aeolus bring?
The tropics are the key region where the Sun dumps its energy into the Earth system. It is this solar input that triggers the large-scale patterns of circulation in the atmosphere.

"These patterns then propagate both north and sound and influence the variability at the mid-latitudes, and, in particular for medium-range forecasts, this influence is very important," explained Erland Källén, a former director of research at the European Centre for Medium Range Weather Forecasts (ECMWF).

Mr Källén, who is now director of the Centre for Climate Research in Singapore, said: "If we don't get the tropics right in the initial state for the forecasting, we can't then get the mid-latitudes right in the medium range."

Simulations of the forthcoming data suggest Aeolus's impact will be like doubling the number of weather balloons available to meteorologists.

Forecast quality is anticipated to increase by 2-4% outside of the tropics and by up to 15% in the tropics themselves.

How come no one's done this before?
Technical problems mean Aeolus is more than a decade late.

The European Space Agency, whose project this is, first approved the mission in 1999, with the intention of launching the satellite in 2007. But engineers struggled to get the ultraviolet laser to work in the conditions it would experience in orbit.

The British arm of Airbus, which led the assembly of Aeolus, essentially had to mothball the chassis, or bus, of the spacecraft for several years while new designs for the laser were sought.

Aeolus is arguably the most difficult mission ever implemented by Esa. Many thought it might never fly.

Anders Elfving is the agency's Aeolus project manager. He told BBC News: "Really what has fundamentally helped us - has motivated us - is the user community, because nobody else serves them with wind information globally.

"We will really still be, after sixteen years, the only supplier of it. And very soon we can give meteorologists our data pipeline and they can tell us: 'yes, you have the breakthrough we wanted'."

What happens after Aeolus?
Aeolus is just a one-off demonstration mission, which raises the question of what happens when it inevitably reaches the end of its working life.

If it delivers on its promise, forecasters will be loath to lose the advantage. But it would not be Esa's role to produce a second spacecraft.

The agency is in the business of R&D, of trialling new concepts. It would be down to others to fund follow-on missions.

In Europe, this would fall either to Eumetsat, the intergovernmental organisation that runs Europe's operational weather satellites, or the European Commission through its own Earth observation programme, known as Copernicus.

It is conceivable also that international partners, such as the US and China, would be interested in lofting a constellation of satellites.

More in this category: « Plastic pollution: 'Stop flushing contact lenses down the loo' Cave girl was half Neanderthal, half Denisovan »
Login to post comments
back to top