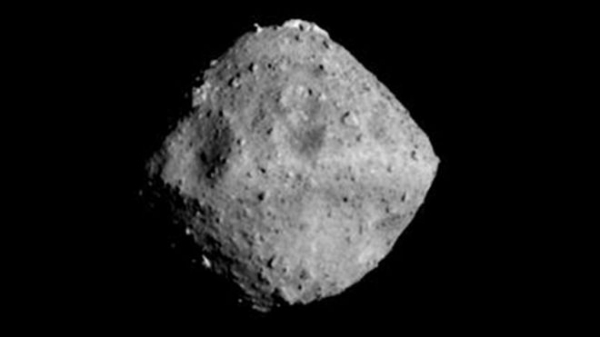 A Japanese spacecraft has arrived at its target - an asteroid shaped like a diamond or, according to some, a spinning top.

Hayabusa 2 has been travelling toward the space rock Ryugu since launching from the Tanegashima spaceport in 2014.

It is on a quest to study the object close-up and deliver rocks and soil from Ryugu to Earth.

It will use explosives to propel a projectile into Ryugu, digging out a fresh sample from beneath the surface.

Dr Makoto Yoshikawa, Hayabusa 2's mission manager, talked about the plan now that the spacecraft had arrived at its destination.

"At first, we will study very carefully the surface features. Then we will select where to touch down. Touchdown means we get the surface material," he told me.

A copper projectile, or "impactor" will separate from the spacecraft, floating down to the surface of the asteroid. Once Hayabusa 2 is safely out of the way, an explosive charge will detonate, driving the projectile into the surface.

"We have an impactor which will create a small crater on the surface of Ryugu. Maybe in spring next year, we will try to make a crater... then our spacecraft will try to reach into the crater to get the subsurface material."

"But this is a very big challenge."

Why is this story important?
Scientists study asteroids to gain insights into the origins and evolution of our cosmic neighbourhood, the Solar System.

Asteroids are essentially leftover building materials from the formation of the Solar System 4.6 billion years ago.

It's also thought they may contain chemical compounds that could have been important for kick-starting life on Earth.

They contain water, organic (carbon-rich) compounds and precious metals. The last of those has tempted several companies to look into the feasibility of asteroid mining.

Dr Yoshikawa, who is an associate professor at Japan's Institute of Space and Astronautical Science (ISAS), said Ryugu's shape was unexpected.

He said asteroids with this general shape tended to be fast-rotating, completing one revolution every three or four hours. But Ryugu's spin period is relatively long - about 7.5 hours.

"Many scientists in our project think that in the past the spin period was very short - it rotated very quickly - and the spin period has slowed down. We don't know why it slowed down, but this is a very interesting topic," he told BBC News.

Hayabusa 2 will spend about a year and a half surveying the 900m-wide space rock, which is about 290 million km (180 million miles) from Earth.

During this time, it will aim to deploy several landing craft to the surface, including small rovers and a German-built instrument package called Mascot (Mobile Asteroid Surface Scout).

Ryugu is a so-called C-type asteroid, a kind that is thought to be relatively primitive. This means it may be rich in organic and hydrated minerals (those combined with water). Studying what Ryugu is made from could provide insights into the molecular mix that contributed to the origin of life on Earth.

The surface of the asteroid is likely to have been weathered - altered by aeons of exposure to the harsh environment of space. That's why Hayabusa 2's scientists want to dig down for as fresh a sample as possible.

The onboard Lidar (light detection and ranging) instrument is used partly as a navigation sensor for rendezvous, approach, and touchdown. It illuminates the target with pulsed laser light to measure variable distances between the two objects. On Tuesday, scientists successfully used the Lidar to measure the distance from Hayabusa to the asteroid for the first time.

The mission will depart from Ryugu in December 2019 with the intention of returning to Earth with the asteroid samples in 2020.

The first Hayabusa spacecraft was launched in 2003 and reached the asteroid Itokawa in 2005.

Despite being hit by a series of mishaps, it returned to Earth in 2010 with a small amount of material from the asteroid.

An American asteroid sample return mission, Osiris-Rex, will rendezvous with the object 101955 Bennu in August.

More in this category: « Greenwich observatory: Astronomers to start studying the sky again Court action to save young from climate bill »
Login to post comments
back to top