Ancient sea reptile was one of the largest animals ever 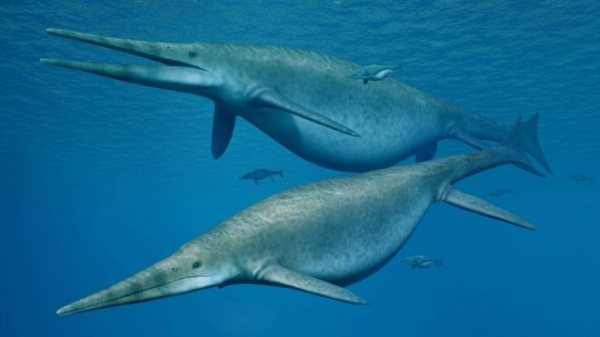 Sea reptiles the size of whales swam off the English coast while dinosaurs walked the land, according to a new fossil discovery.

The jaw bone, found on a Somerset beach, is giving clues to the ''last of the giants''

that roamed the oceans 205 million years ago.

The one-metre-long bone came from the mouth of a huge predatory ichthyosaur.

The creature would have been one of the largest ever known, behind only blue whales and dinosaurs, say scientists.

The ancient jawbone was found near the village of Lilstock by fossil collector Paul de la Salle.

He first thought it was a piece of rock but after seeing a distinctive ''groove and bone structure'' realised it might be part of an ichthyosaur.

Dean Lomax, a world leading expert on ichthyosaurs from the University of Manchester, compared the bone with other specimens.

''It was a giant piece of mandible from an ichthyosaur,'' the palaeontologist told BBC News.

''We were mind blown to think that a sea creature the size of a blue whale was swimming off the English coast about 200 million years ago.''

Severn Crossing
The discovery, reported in the journal, PLOS One, also clears up another long-standing mystery.

In 1850, a large bone was found at Aust Cliff below the Severn Bridge in Gloucestershire.

Scientists have been unable to work-out whether the fossil and several other large bones found at the site came from a dinosaur or from a mystery reptile.

Extinction stories
During the age of the dinosaurs, the ocean was home to many types of ichthyosaur.

They appeared in the Triassic, reached their peak in the Jurassic, then disappeared in the Cretaceous - several million years before the last dinosaurs died out.

Ichthyosaurs were among the first skeletons to be discovered by early fossil-hunters, at a time when theories of evolution and concepts of geology were starting to take shape.

The fossil hunter Mary Anning discovered the first complete fossil of an ichthyosaur in the cliffs near Lyme Regis, Dorset, in 1810.

Her discovery shook up the scientific world and provided evidence for new ideas about the history of the Earth.